On two or three occasions I have referred to the wonderfully neat work of the leaf-cutter bee, and I have just received some Marechal Niel rose leaves from Rock Ferry from which clean-edged oblongs and circles have been nibbled out. The leaf-cutter bees are not unlike our honey bees to look at, but their habits are very different. The pieces cut from the leaves are used to build the cells of their nests, and very wonderful cells they are. The cells lie end to end, and are packed into a tunnel or burrow, in some species in the ground, in others in woodwork or timber, or in a hole in a wall. The long fragments are folded one upon the other to form a thimble-shaped tube with a convex base; the round bits form the door, which is concave. The end of one cell fits into the door of the next. Each cell is half filled with pollen as food for the future grubs, an egg is laid upon this, and then the door is sealed up; the grub hatches and lives upon the food until it pupates and emerges as a perfect bee.

Presumably, the eggs first laid should hatch first, but, so far as I can see, the last cell must be the first to allow its inmate to escape, and the others in turn must work their way through the tunnel of empty cells. Some of the cells are wonderfully coloured, for the bees will at times cut their bits from flower petals; but the leaves of the rose are most favoured by these neat house-builders, at any rate by the commonest species. 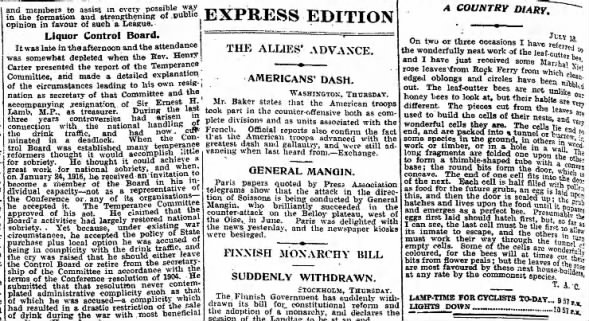 « This is why you definitely should NOT leave sugar water out for bees
Save the native bees: Reframing the bee problem »